One has to do with a simple signing of a name, Donald J. Trump, to an executive order that allows that man’s benefactors to kill (for sport and trophy) bear cubs, wolf cubs, including the not-ever-to-be-numbered or identified children (human cubs) who’ve been orphaned by a zero-toleration policy because no one – let me say that again NO ONE – knows who or where they are, neither the parents (deported or imprisoned) nor the children (and no one has kept track of where to find them).

The second has to do with the rolling back of the Endangered Species Act criteria. Two immediate consequences, about which so many of the animal species homo sapiens(homo-non-sapiens) refuse to acknowledge, never mind “ingest”, not even penetrating the skin.

The Orca mama in Puget Sound, carrying her dead baby for days. That’s enough grief just by itself. The story has left the newscasts but the implications and obvious truths have not. Those who are paying attention have named the toxins that are poisoning the salmon that Orcas eat, and the mama Orcas are feeding toxic milk to their babies. My point here is the interconnectedness We humans (human non-sapiens and these days anti-sapiens,)refuse to understand we are looking into a mirror, and the reflection we see is our future. The Orca babies are dying because of toxins in their mamas’ milk, because their mamas have eaten the salmon who carry the toxins in the fat of their bodies, and the toxins are in the fat of their bodies because they feed on the water creatures of Puget Sound. All of us in the earth community are dying from our human non-sapiensindifference, arrogance, human-centeredness, greed, narcissism. And the man who lives in the White House is looking forward to a 21stcentury star wars.

The third thing has to do with elephants.

Carl Safina is a courageous man, no more and no less so than those who live among the African elephants and record their destiny which, in these days, is bleak. Carl spent time among these elephant watchers, gazed upon both beauty and grief. I say he is a brave man because I still have to turn away from this violence. I call them Elephant Witnesses, and I cannot even imagine how hard it is to watch those who’ve befriended you, whom you’ve named, whose children you’ve watched come into this world.

I want to tell you about a friend with whom I have had many connections over the years including a collegial relationship and beyond the bounds of collegial, friendship.

I don’t know if I am among many or not. I do know that her posts have been the kind we might not want not to know about, and the kind that we must learn to gaze upon, not unlike the commitment of Carl Safina.

My friend’s gift to me is the story of an interspecies sharing of grief. She tells the story of an elephant mother who has lost her child. My friend was there shortly thereafter and the story of the dead elephant baby was fresh and raw. At the death of the baby, the mothers of the elephant tribe wailed, beat themselves against trees, stomped the ground sending waves of grief across the region. Then the mama elephant whose baby this was, stomped across the camp of humans until she reached my friend, and she stood there. Human mama to elephant mama, sharing their grief. They touched, skin to skin, shared the smells of one another – human and elephant. They understood one another. The knowledge, experience, wisdom, and love that passed between the two of them was beyond what most of us can hope to know and even imagine. In time to come, I will offer more links to my friend’s narrative. https://lindsaymckinnon.coachesconsole.com/camping-with-elephants.html 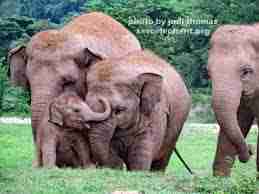 What we need to dismantle is the obstinate god-sanctioned lie that places humans at the top of a hierarchical creation, untouched and untouchable by the destruction we wreak on the earth community. There can be no healing until we unlearnthe presumption of human primacy, until we flounder in our unknowing, and do nothing until we understand the need to recognize our interconnectedness and interdependence. Until that transformation of vision, we are presiding over our own destruction as well as the destruction of so much else.

PS I tried to post an image of mama orca and her baby, but, unlike Carl Safina, I was not able to gaze into it. It hurt too much. I’ve often considered that one of my (many) failings.