Listen to the music.
I am the concert that flows from the mouth of every creature,

singing with the myriad chords.

The story from The Daily Good to which this verse was attached was titled Singing to Tomatoes, and it caught my fancy. I am enthralled with the science which at last offers substance to the capacity of cognitive communication and vibration – human and non-human – taking place all the time, among all that make up the earth community.

I am thinking now about the trees and the granite boulders on the land I walk with our dogs. There are three trails on this land, trails that stretch through the woods from our home to Tannery Pond. I vary the walks – three or four each and every day, the first one attempted in the first light of the morning when my joints are not yet oiled. Sometimes the dogs and I negotiate which trail we’ll take. Other times, the dogs get their way, because they are ahead of me, and so I follow. From time to time I insist on my own way. Three trails: the Outer Loop, the Ridge, and the Highway. The Highway goes straight from house to pond. My daily goals have to do with time and distance: at least two hours and at least three miles. I combine the trails; any two of them make a mile. If we stay at the pond for ten minutes or so, each walk takes forty minutes.

The trails are not the only ones with names. I name trees: white pine, birch, maple, oak, poplar, and beech mostly. From time to time, names just come to me and I know the power of them: Beauty and the Birch. Other times I wait until I can hear the communication – tree to me. Not infrequently, I name them out of my own projection, and find that they have a different idea. If a tree is reluctant to introduce itself, I simply greet noname – no-na-me, three syllables. Is it too fanciful to think that trees like introducing themselves?

Rocks have names, too.

I can shut my eyes and name the trees and rocks of the Outer Loop:

Grandfather Fallenbe is a tree which has fallen. At his foot stands a white pine who, for a long time, did not share her name. After weeks of greeting her daily, I heard the name: Elephant Tears. Two knots are reminiscent of sad elephant eyes, and from them the bark flows down, rivulet to rivulet.

And then I greet the pine known (formally) as Lower Slingshot. People who know her well call her Granny Sling. I call her Grandmother Dear Tree. 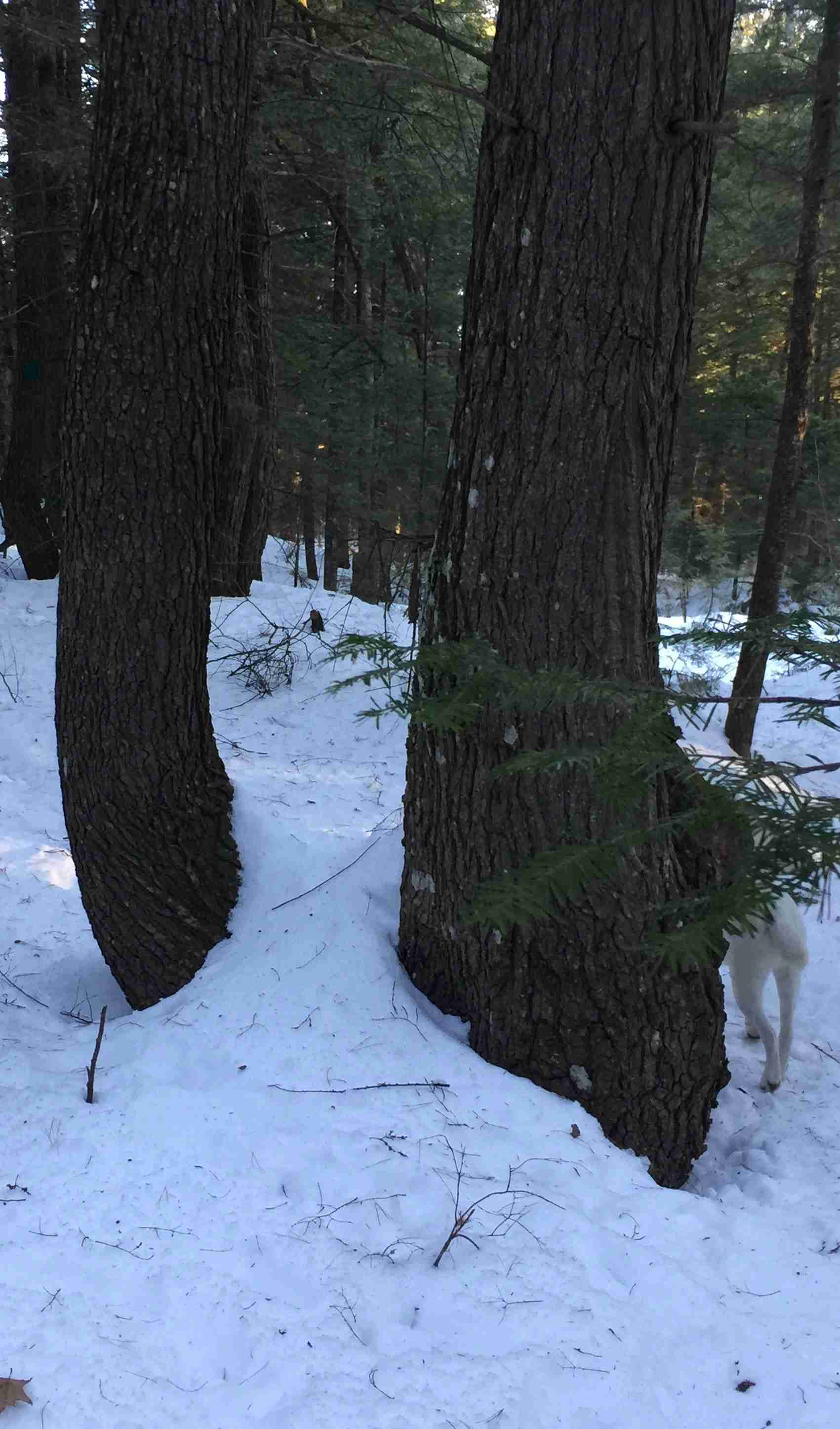 Across from her is Standing Rock – 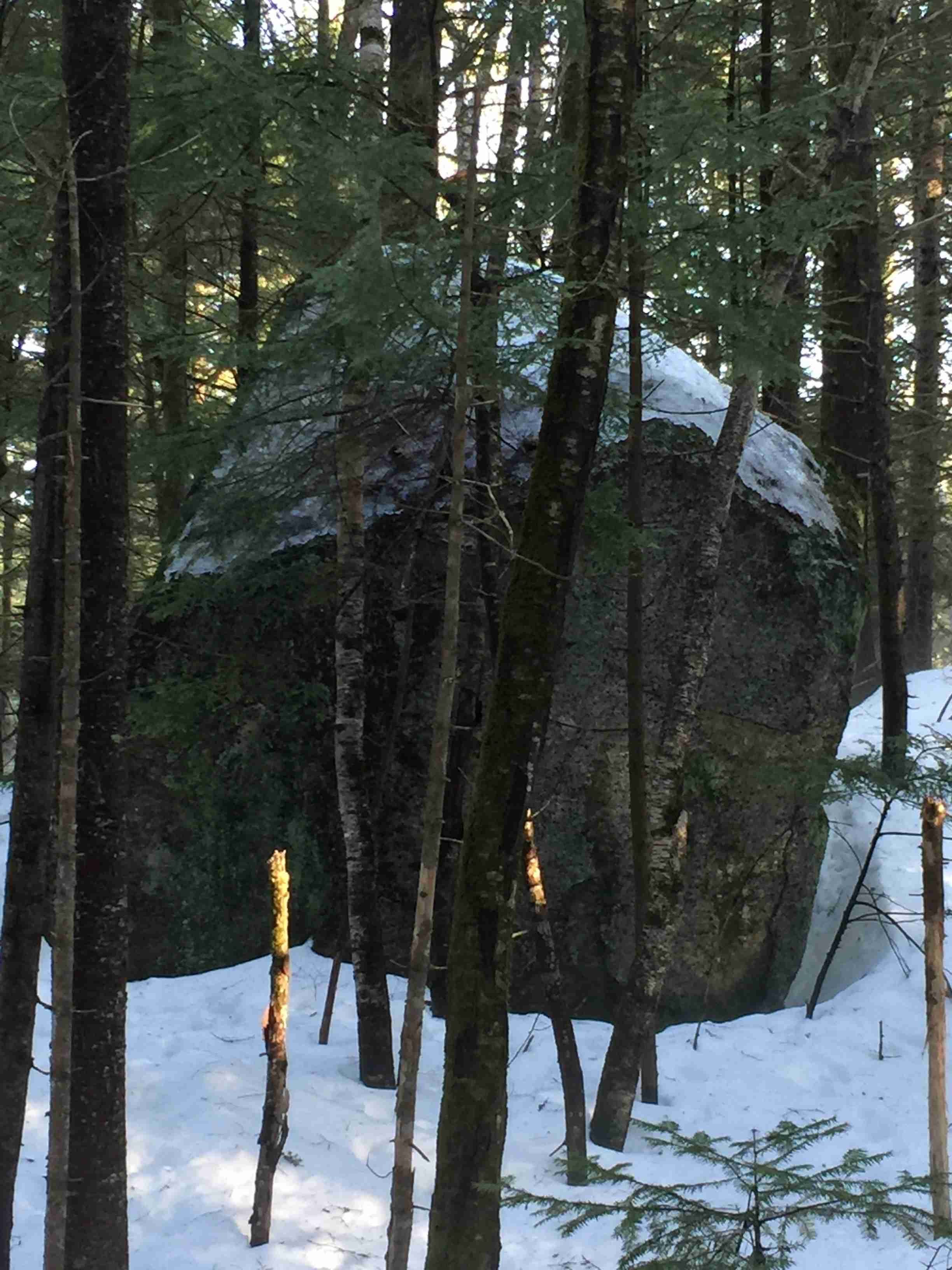 it’s why we’re known as the Granite State – twelve or fourteen feet high. Then comes:

Bob Wire (barbed wire over the years has grown into this tree). Bob is a trans. He used to be Barb Wire, but he transitioned.)
Mama Bentwood and quite a few young Bents
Buckhorn (an antler rub)
Beauty and the Birch
Whale Maiden (granite)
Old Paint (Poplar with moss)
Softly Dying
RT (RT was my recliner. I could lay back on her and gaze through the branches of several trees into the clouds. RT split in two one day, and I could no longer recline. Because her bottom half has been rotting, I named her R2 and then R-squared, but she prefers RT.
Then Papas Bill and Bob, fraternal twins, one a pine, the other a birch, twins named after friends from elementary school.Uncle Willie and Uncle Charlie – these are my great grand uncles, both fallen.
Uncle Willie and Uncle Charlie were my grandmother’s uncles, and they were brothers. One fought for the Union, the other for the Confederacy. Both died. Not in the same battle, so I’ve been told.

As I come up over the rise, the beeches sing. I love the beeches in winter. They keep their light brown leaves, and when there is wind, they rattle. I have a friend whose name is Beecher, and so I have named these Beecher Woods. They seem to like it – they rattle a lot.

Tre (pronounced tray) is a stump of a birch which Jim had to cut, because he was ready to fall.

At last the dogs and I arrive at Tannery Pond. I have two friends (so far) at the Pond. One is an altar of stone, in honor of Jim’s brother John. On the stone live two hippopotamus(es?) because John loved hippos. He died in 2016, and asked that the family scatter some of his ashes in Tannery Pond. The stone altar with hippos is his gravestone, Hippocampus.

Great Grandfather lives on the bank of Tannery Pond. He is old.

Before the dogs and I go on any walk, I fill a pocket with kibble. As we walk, I offer kibble to the trees, seeking (and finding) crevices in the bark or woodpecker holes to leave them, a great game for the dogs who love to sniff them out.

Walking through this community of tree and rock gives me a profound sense of belonging. It’s hard to be lost when you know the names of the denizens of the woods. I like to think they know my name. I wonder.